Limerick respond with nerveless self-belief to draw with Tipperary 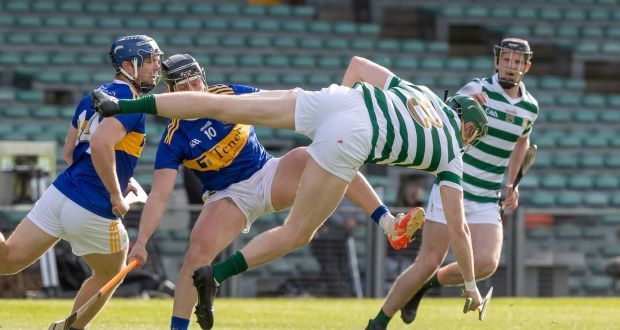 Mmmh. Neither team quite had each other on the rack. Both left the other off the hook. Nothing gained or squandered, in particular, but as a mild May sun fell behind the Gaelic Grounds, Limerick might have shuffled away slightly the happier band of hurlers.

Why? The All-Ireland champions have extended their unbeaten run into the new season. And this game, as it deepened, felt more important to Tipp. And they put themselves in with a genuine chance to make a significant early statement: a deserved four points clear (0-19 to 0-14) when the teams broke for the dreaded water break after the ‘third quarter’.

They actually pushed five clear after the restart but the enforced stoppage proved itself to be a momentum breaker yet again. Limerick gathered in the shadow of the Mackey stand. John Kiely told hurler of the year Gearóid Hegarty to limber up and sent him in.

This was Limerick’s first serious test of the season. Their scoring rate had been stalled by Tipp’s industry and organisation in the second half, with just three points in 20 minutes after half-time - and no score from play until the industrious Séamus Flanagan lost patience and wandered downfield to collect a ball and whip it over the bar. That score signalled Limerick’s steady climb to parity, with Peter Casey and then David Reidy levelling the day going into injury time.

The game finished on an appropriate note. The contest had settled into a free-scoring contest (the foul count 21-10 in Tipp’s favour) and Jason Forde briefly pushed Tipp back into the lead before Reidy balanced the books. Overall, it was Tipp’s failure to capitalise on Forde’s haul of 0-14 (11 frees, 1-65) that ultimately hurt them. He was the only starting forward to score in the second half.

“We struggled to get on quality ball and find space and when we did we didn’t really finish it off,” said Tipp manager Liam Sheedy. “That is a disappointing aspect of our game. Sometimes the final pass let us down. But let’s not forget, you can play all the internal matches you want. Nothing prepares you for a game like today. You didn’t see that real crisp style and goal chances so our players deserve great credit. It is a big step up.”

It was that. Before the game, a relaxed John Kiely allowed that stray passes and untidy handling would be forgivable after the long break. If so, the All-Ireland champions skipped a free pass. There were mistakes but the quality from both teams was high and they retreated at the break with 0-12 each on the board. Neither Kiely nor Sheedy were up for gambling on this encounter, naming - and sticking with - conspicuously strong teams before the throw-in. Already, in early May, the teams have half a mind on the more serious business of summer.

Some things hadn’t changed. Limerick presented a formidable physical collective, all the more in the striped commemorative shirts they wore for the occasion. From the beginning, they tried to engage the high pressing intensity which the Tipp defensive collective met with composure, with Bryan McGrath enjoying an impressive first half in an entertaining battle with Séamus Flanagan in the first quarter and, again, in the second half.

Flanagan led the scoring for Limerick with three of his trademark points, coming infield to collect a pass and drifting away from his marker to create the space for those efficient, high-percentage strikes. He had a no-nonsense 0-3, but Tipp were successful in closing down the fringe spaces where Limerick are capable of hurting teams with distance strikes.

At the other end, a sharply taken score from play settled Forde into a highly productive first half while the only real goal opportunity fell to Jake Morris in the 27th minute: it was a flash of a chance and although the connection was decent, the shot was directed at Nickie Quaid, who smothered the ball and cleared.

There was no disguising that Tipp wanted to make a statement here in the opening evening of a hectic hurling season. Early in the second half, the team responded to Sheedy’s overtures on the sideline and reached a pitch that the champions struggled to reach. They helped their visitors with a succession of fouls which Forde gratefully converted, pushing Tipperary into that five-point lead going into that final quarter.

Limerick responded with the nerveless self-belief that underlines just how far they have travelled in three years. Damien Reidy excelled in his free-taking duties during the nervy final minutes and Diarmuid Byrnes, a handful in the second half, had a late, long-range chance to turn the day Limerick’s way. But nobody had any complaints.

“That was a learning curve,” Sheedy said brightly. “If you are going to play against Kyle Hayes, Barry Nash, Diarmuid Byrnes: they are a top-class defence. No better way to learn. You can be messing around and tippy-tappy but there is no tippy-tappy with them boys.”