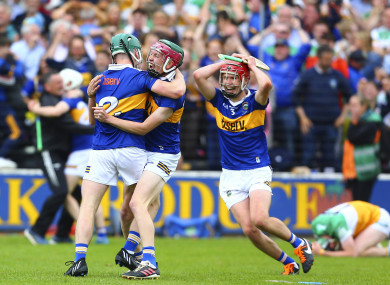 TIPPERARY JOINED KILKENNY on top of the All-Ireland minor roll of honour in the most dramatic fashion imaginable in Nowlan Park this afternoon, as Paddy McCormack’s overhead strike in the fourth minute of stoppage time completed an incredible comeback from six points down just 10 minutes previously, all while playing with a man sent off.

The best way of describing the first 55 minutes is that Offaly were the superior team, but not so much that they could shake off a Tipperary side that continued to try and find ways to create opportunities in a watertight Offaly rearguard.

With the finishing line in sight, Offaly lost their shape however, dropping deep and inviting Tipperary on, and sure enough Tipp gradually picked off scores, including points from starting defenders Sam O’Farrell, Jack O’Callaghan and Aaron O’Halloran.

O’Halloran’s score made it 1-16 to 0-17 after two of the allocated four minutes of stoppage time, and when Offaly went long with the restart and failed to win possession, Tipperary had the chance to mount one more attack. When referee Shane Glynn decided not to award a free for what looked like a trip on Niall Furlong coming out of defence, Tipperary won possession, earned a free of their own, and Paddy Phelan floated in what proved to be the last, most important pass of the game.

Over 20,000 supporters packed out Nowlan Park for the fixture, most of them from Offaly and most of them arriving early, and the tension of the occasion certainly showed in the early stages when there was no shortage of workrate and effort from both sides, even if moments of real creativity were rare.

Adam Screeney and Daniel Hand picked off some excellent points for Offaly while Adam Daly and Tom Delaney kept Tipperary moving score for score with good snapshots from midfield, but most of the early points came from dead balls, at least until Offaly exploded into life in the five minutes before half-time.

Leigh Kavanagh won a puckout and set up Conor Doyle, Screeney shot two more unbelievable points, then Daniel Hand split the uprights from the left touchline. With stoppage time getting underway, a measured diagonal ball from Screeney played in Leigh Kavanagh, and after shaking off a tackle, he drilled a low shot to the bottom of the Tipp net.

Offaly might have added more, but Tadhg Sheehan recovered well to prevent Niall Furlong getting a goal shot away, and Screeney had another effort blocked down, in what later proved to be crucial interventions.

The reset suited the Munster county, who sprung out of the traps after half-time with points from Joe Egan, and Damien Corbett (two), though a close-range free should have reduced the gap to two, and instead Tipp tried to work a goal chance and had their effort repelled.

That reprieve energised Offaly and the next three points went their way, including highlight reel points from Donal Shirley and Shane Rigney, and that looked like it might be enough.

Offaly had a chance to seal the victory in the 53rd minute when substitute Cathal Robinson was put through on goal, but a thrown hurl from Tipperary’s Damien Corbett brought the Kinnitty player to ground before he could shoot. A red card was issued to Tipperary’s top scorer, but the goal chance was gone.

Even still, the point to make it 1-15 to 0-12 looked like it would be enough, with just 14 Tipperary players on the field. Instead, a special occasion was about to be crowned with a special finish.