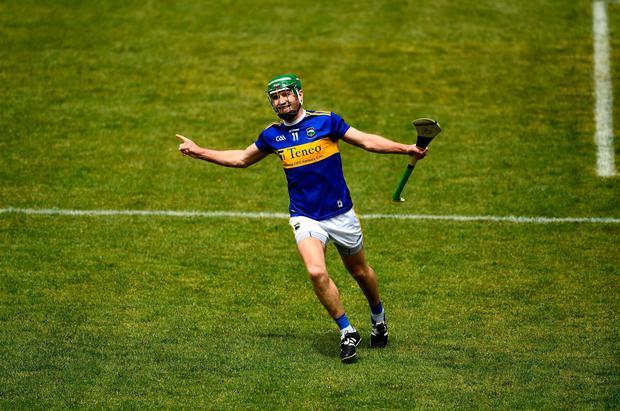 Tipperary put in a blistering finish to seal their first win in the National League, reversing last November’s All-Ireland quarter final loss to Galway. The visitors were just two points in arrears when Jarlath Mannion was red carded by referee John Keenan in the 67th minute and while Evan Niland scored a minute later, five of the last six points went to the home team.

In that spell Michael Breen, who came off the bench in the second half, scored two points and stormed into the match, and Ronan Maher landed an inspirational long range effort, his second of the day. Galway, with nine changes from the side that beat Limerick, won’t be too disheartened by their first loss of the campaign, having rotated their squad so freely.

Cathal Barrett was named the TG4 man of the match after a typically tigerish defensive display but he was also involved in the incident which led to Mannion’s dismissal, an off the ball confrontation that was spotted by the umpires on whom Keenan had to rely for evidence.

Tipperary went into this match under a cloud following the news of a season-ending injury to Patrick ‘Bonner’ Maher, their tenacious half forward from Lorrha. Maher ruptured his Achilles tendon during training with the county on Thursday night, the news all the more cruel given his efforts in recovering from a cruciate injury in June, 2019, which ruled him out of their All-Ireland win that August.

The win will help raise spirits. They made four changes from the side that drew with Cork, but Galway were more experimental in changing two-thirds of the team that started in the win over Limerick, when they ended the All-Ireland’s long unbeaten run that extended back to the 2019 All-Ireland semi-final. The most interesting was the recall of Joe Canning after an impressive midfield cameo last weekend in Salthill, but there was also a return for Daithi Burke at full back in place of Gearoid McInerney.

Burke, a five-time All Star and tremendous servant, looked rusty in an opening half in which his team conceded two goals but Darren Morrissey made a series of sharp interceptions and stood out as the best of Galway’s rearguard. Tipp went direct with much of their play, trying to use their talented inside forward line where John O’Dwyer hit two first half scores and Jason Forde banged in one of their goals.

By the interval Tipp led 2-7 to 0-11 but it wasn’t entirely convincing, their nine wides leaving the door open for a late first half recovery by the visitors. Having suffered the setback of Forde’s goal, set up by Noel McGrath in the fifth minute, they had their defence breached a second time when McGrath turned finisher, cracking home a powerful shot past Eanna Murphy when set up by Forde on the half hour mark.

That strike had Tipp seven points clear and Galway looked in trouble. But their response was impressive and gutsy, with Shane O’Neill’s side hitting the last five points of the half, with two Canning frees, one from Conor Cooney after a pinpoint pass from a Canning sideline, another from Brian Concannon and newcomer Kevin Cooney also getting off the mark.

Galway definitely went off the pitch for the half time break the more content, with Conor Whelan still scoreless, being marked and actually outscored by Barry Heffernan.

Whelan sprung to life with the first score of the second half and then set up Conor Cooney to tie the sides, ending a sequence of seven unanswered Galway points. But the visitors began to miss good chances and ran up six wides before they managed to score again. The excellent Concannon took his total to three when they again found their range.

Galway ran through their bench, resting Canning and Burke for the final quarter, with Tipp leading narrowly at the last water break, 2-11 to 0-16. Niall O’Meara and Brendan Maher came on and contributed scores and two Forde frees had them two clear entering the final ten minutes.

Galway were still in the hunt but the red card turned the momentum back Tipp’s way, for whom John O’Dwyer hit three marvellous scores and looked back to near his best form. Noel McGrath finished with 1-2 but his brother John had little influence and was taken off at half time.

Galway return to league action with a home match against Waterford on June 6, with Tipperary traveling to Mullingar to hurl Westmeath on the same day.