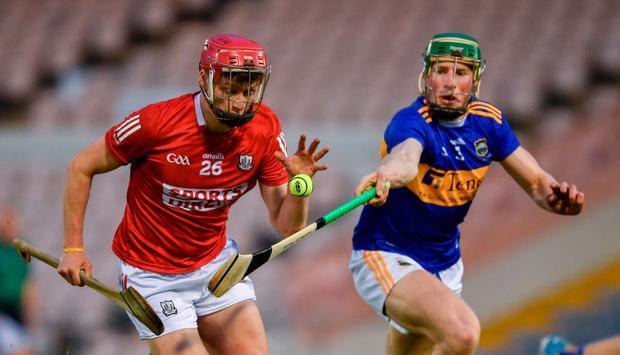 Tipperary, facing a buoyant Cork team that scored five goals the previous weekend, chalked up a second draw in the Allianz National Hurling League at Semple Stadium after an injury time free by Jason Forde.

Having brought back a few of his more experienced players since the stalemate with Limerick last weekend, Liam Sheedy watched his side aim to repeat last November’s championship win over Cork in the qualifiers. But he will be pleased with a share of the points.

The home team were boosted by the full return of the two McGraths, Padraic Maher and John O’Dwyer and still await 2019 Hurler of the Year Seamus Callanan. In Callanan’s absence, Jason Forde has often thrived on the added responsibility, with 0-14 against the All-Ireland champions last weekend. Here he was less accurate, but still contributed 10 points from dead balls.

Tipperary, having suffered regular defeats at Limerick’s hands in recent years, left the Gaelic Grounds relieved and upbeat a week ago, with a point that had the potential to be two, but could easily have ended up being none. This also looked like they would leave empty handed when a strong start to the second half was undermined by poor shooting. Cork hit them with a second goal in the third quarter from Patrick Horgan and led for most of the remainder.

The challenge for Cork, one that has frustrated them and given them long winters of regret over several years, is to produce displays like they managed in the first round consistently. To reach the levels of almost metronomic high performance that Kilkenny once achieved and still do, at a more modest pitch, and that Limerick do better than any team now. In that respect this was a reasonably encouraging sequel.

Inconsistency is a curse that has also assailed Tipperary, of course, more broadly in their long quest to put two All-Irelands back-to-back, last achieved by the Premier in 1965. Another stand-alone title this year for Sheedy would more than satisfy current appetites with a team carrying a large party of older players - or perhaps a large party of older players carrying Tipp. The transition to a younger mix has been slow and a little hesitant but is starting to manifest itself more now.

With the championship coming up hot on the heels of a rapid-fire league, all these gains will warm a manager’s heart and bolster confidence. This match wasn’t a season-breaker or a season-maker, then, but Cork and Tipp will always have some market value and the teams had an equal need to build up a line of form. Despite their fine start Cork still saw reason to make five changes, and some positional switches, to keep competition for places keen. Probably up to half a dozen of the visitors’ starting team are uncertain starters for the championship.

After enjoying a bumper goal harvest on the opening day, Cork managed to pierce the Tipperary defence after just ten minutes when a beautifully crafted move led to Tim O’Mahony flicking the ball to the net. It began with Patrick Collins finding Mark Coleman with his puck out, the stylish half back then hitting O’Mahony’s raise hand with a pinpoint diagonal ball. O’Mahony worked the ball to Patrick Horgan who drew it back across the goal from a wide position and O’Mahony was there to finish.

They should have had a goal before then but Jack O’Connor missed a great opportunity with only goalkeeper to beat with just over a minute played. The move involved Robbie O’Flynn and Alan Cadogan, who put over two first half points, but O’Connor couldn’t punish Tipp with the home defence stretched.

After a shaky start Tipp settled. Points from John O’Dwyer, Noel McGrath and John McGrath opened up a lead and while Cork drew level, a lovely score from Jake Morris after a strong run edged Tipp back in front before the Cork goal. But the sides were close all through the half, Cork, Cork dealt a blow when O‘Flynn had to leave the field injured having scored a well-worked point. Five times they were level but as the rain began to fall late in the half Tipp got their noses in front. Forde put over six frees to help them to a 0-12 to 1-8 at half time.

Tipperary restarted on top but hit six wides in the opening ten minutes, as they moved three points clear for the first time. They were made pay for their profligacy when Cathal Barrett lost the ball coming out of defence and Cork countered, Horgan goaling after good approach work by Luke Meade and Darragh Fitzgibbon. The goal tied the teams once more.

At the last water break Cork led 2-10 to 0-15 and moved three points clear soon after the resumption. But with five minutes left there was just a point in it, with Tipp still blowing chances but never giving up the chase.